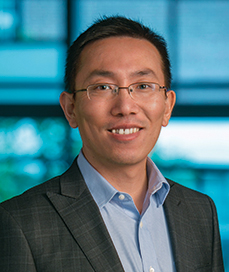 The Department of Materials Science and Engineering at the University of Pennsylvania is thrilled to announce that Liang Feng has been promoted to Associate Professor with tenure. We look forward to many years ahead of Liang being a groundbreaking researcher, an inspired teacher, and a valued colleague.

Liang’s research expertise is in the area of large-scale integrated photonic circuits and novel nanoscale photonic devices. To appreciate the impact of his work, consider that most integrated circuits and devices that support the immense computing and communication power of our modern lives are based on manipulating electrons. Our systems for encoding and transferring information are based on electrons, because decades of research uncovered how to manipulate materials to control the flow of electrons. However, as the quantity of data explodes and even faster manipulation is desired, relying on electrons is proving to be a limitation. Since launching his independent research career, Liang and his students have dramatically narrowed the gap between what can currently be done with electrons and the promise of photonic (light-based) technologies. Currently his research is focused on the intersection of quantum materials and photonics toward applications in computer and communication systems.

As an early career scientist, Feng has already led a decorated career. His research accomplishments have been recognized by the ARO Young Investigator Award (2016) and the NSF CAREER Award (2019). Last year Liang was elected as a Fellow of the Optical Society of America in 2019 and earlier this year he was named a Sloan Fellow. And here at Penn, he is a highly respected Professor and received the 2020 S. Reid Warren, Jr. Teaching Award, nominated by students.